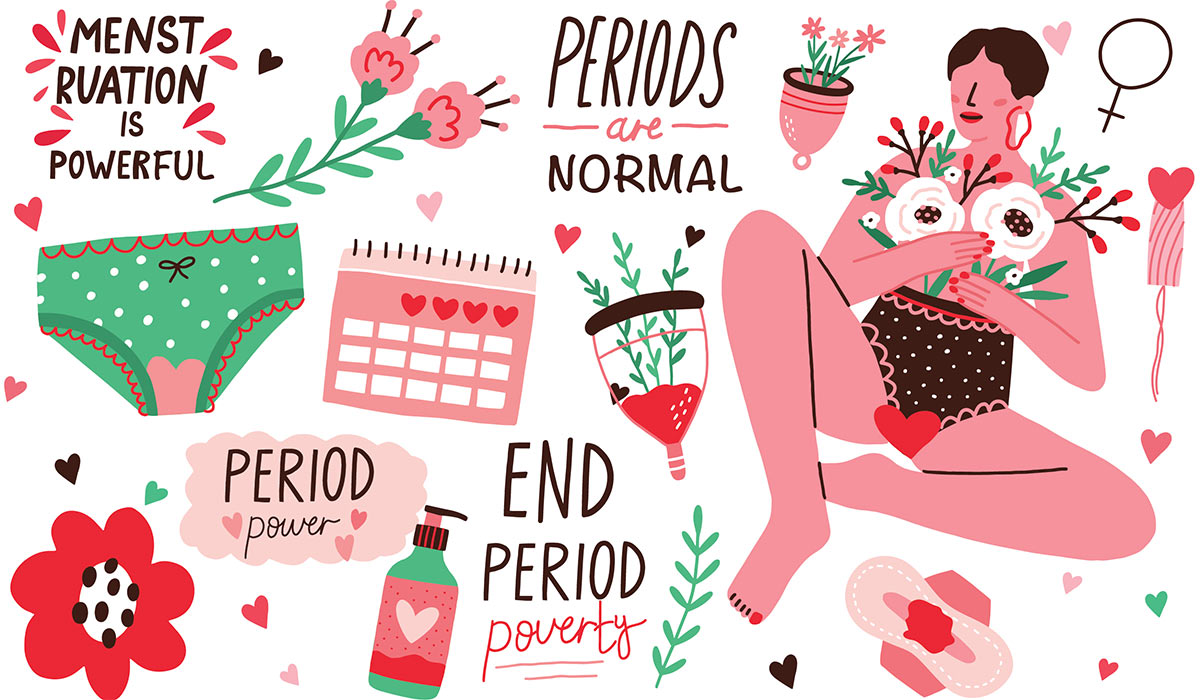 1. The average menstruator has more than 400 periods in her lifetime

The sleep hormone melatonin can impact the length of your period. Melatonin helps control the release of the reproductive hormone that influences when your menstrual cycle begins and ends.

Most people who menstruate will notice their period doesn’t remain the same color from beginning to end; it may appear bright red for the first few days and a deeper, brownish-red towards the end. However, you should pay attention as it can tell you different things about your health.

According to Planned Parenthood, most periods last between three to seven days. You’re also most likely to start your period between the ages of 12 to 15. However, some people start menstruating as early as eight years old.

If your PMS bloat has gotten out of control, there are certain foods that can naturally relieve symptoms. Our go-to? A banana. Rich in vitamin B6 and potassium, bananas can help reduce water retention, making you feel bloated and blurgh. Although including bananas in your everyday diet is also a good thing, a lack of potassium can actually cause muscle cramping.

Another great natural painkiller for cramps is cinnamon, which has antispasmodic, anti-clotting, and anti-inflammatory properties, which are basically the key properties you need during your period. For more forms of natural pain relief, check out this post.

Your breasts can enlarge as much as a full cup size during your menstrual cycle. However, days after your period, your hormone levels drop, and your breasts will be at their smallest.

If you have severe PMS symptoms such as intense cramps, acne, and heavy periods, it could be a sign of hormonal conditions such as PCOS and/or endometriosis. Too often, these symptoms are dismissed and overlooked, so it’s important to be aware of the conditions so you can receive the correct diagnosis. Here’s a brief overview.

PCOS: PCOS is a hormonal disorder that occurs among menstruators who are of reproductive age (after your first period) when your hormone levels are out of balance. As a result of this imbalance, it can cause many small fluid-filled sacs to grow inside the ovaries. 1 in 10 women have PCOS, yet it’s a condition that few menstruators know about, let alone know they have. Find out more about PCOS here.

Another health condition to be aware of is menorrhagia, which is the medical term for heavy bleeding that typically lasts longer than seven days. Despite its anonymity, approximately 1 in every 20 menstruators has menorrhagia. This means periods can be so heavy that you would need to change your tampon or pad in less than two hours. If you have menorrhagia, you can also experience very heavy clotting.

A tampon can become a great environment for growing bacteria when saturated with blood. For reasons that are still unclear, under certain conditions, bacteria can rapidly grow and release poisons that can cause toxic shock syndrome (TSS) if they get into the bloodstream. If this happens, it can be fatal.

While most menstruators have heard a horror story about toxic shock syndrome and naturally worry about it,  Dr. Mary Jane Minkin, Professor in the Department of Obstetrics, Gynecology, and Reproductive Sciences at the Yale University School of Medicine, says it’s actually very rare! “Even at the height of the toxic shock “epidemic” (1980-81) there were about 200+ cases annually in the US, so it was very rare.”

Contraceptive pills can seriously alter your “regular period.” In some cases, it can cause your periods to stop altogether, while some find that it helps to regulate their periods. While the contraceptive pill can be a very effective form of birth control, it can also be used to help ease heavy periods. Read this to learn more about how contraceptive methods impact your skin and your cycle.