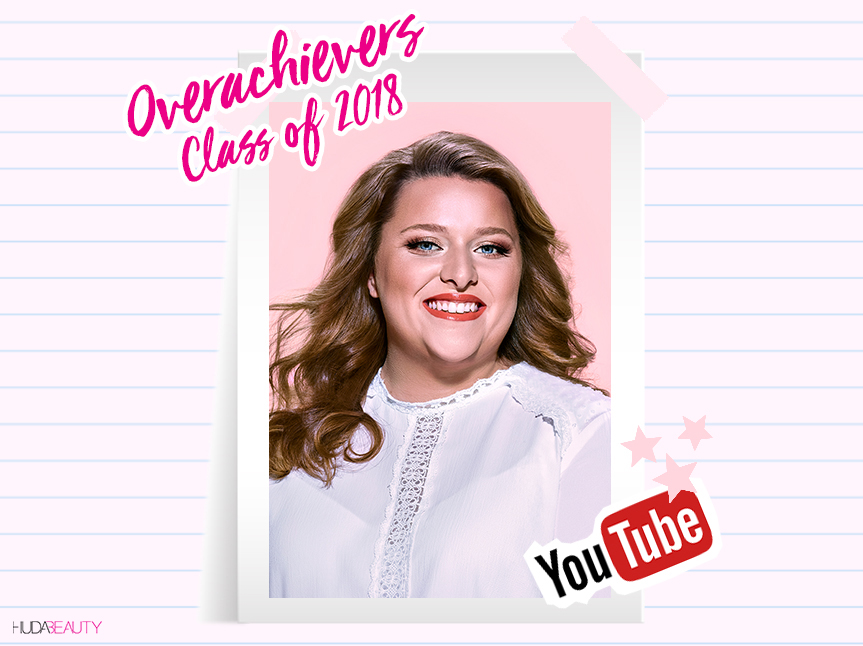 When we made our concealer, we wanted to create a product for all the hustlers who always go the extra mile and need a product that works as hard as they do. So, to celebrate its launch, we wanted to hear the stories that inspired the concealer, and find out about all the moments where you guys achieved more than you ever dreamed was possible.

When we first heard Honor’s story, we immediately wanted to find out more and delve into the world of @Gh0stBlondie – Honor’s secret beauty blogger name. Due to a history of being bullied, Honor kept her entire blog and Instagram page a secret (she didn’t even tell her family), even though she was completely killing it and had a rapidly growing following.

Until one day, and she insists “she has no idea how,” someone found out about @gh0stblondie and shared her channel with her class at school. Honor told us that people started teasing her and making fun of her channel, and that it was so bad, it led her to drop out of college. And yet despite that, Honor didn’t let it her stop her, she continued blogging using her haters as her motivators. She’s now more determined than ever to pursue her love of blogging and transform it into a full-time career. As you can imagine, we HAD to meet her.

5 things we learned about Gh0st Blondie:

1. She’s going to prove everyone wrong

When we asked Honor what she wanted to achieve in the next year, she answered instantaneously, “to prove everyone wrong”. She wants to show all the people who made fun of her that it’s not funny, it’s her passion, and it’s going to be her career (and a very successful one). She even told us that she “started receiving hate comments on her page, and it actually turned out to be people from college” people who were once her friends. But, she doesn’t let that get her down, she uses it as fuel to her fire. #Inspiration.

2. She still has no idea how people found out about her blog, but she’s glad they did

Although she still doesn’t know how her “friends” at college found out, in retrospect, she’s glad they did, as it means she doesn’t have to hide behind the secret anymore. She told us that, “that’s why I put the zero in gh0st, so it would be harder for people to find.” Honor told us that although she felt “quite distraught at first,” now she feels a “sense of relief, and now with every success – no matter how small or large, I know they’ll see it.”

3. She gets her resilience from her Mom

When we asked Honor who inspires her on a daily basis, she smiled from ear to ear and told us it was her mom, as she “keeps the family together.” She told us about some of the struggles her family has faced; losing her baby sister, and then her youngest brother, Finn, was born prematurely. And Honor said that despite all of this, “my mom remained so positive for the rest of the family, even though it was clear she was hurting.”

4. One day she’s going to have her own makeup line

When we asked Honor about her long-term dream, she didn’t have to pause and think; she told us “I’m going to own a makeup line one day” – and we’ll be her first customers! She said that she feels like there’s a gap in the market, and she has the ideas to fill it, “there’s definitely makeup that doesn’t exist.” Telling us she’d “love to create a makeup line that’s more artistic” but we won’t give away too many deets. You’ll have to follow Gh0st Blondie for updates.

5. Hold on to the positives

When we asked Honor about her journey to self-love, she said she always tries to hold onto the high points and see the positive side of every situation, even when it may not be a clear victory. She told us about a time when she entered a competition to be a brand ambassador, “in the end, I wasn’t chosen, but I did make the shortlist.” Instead of getting upset that she didn’t get the job, Honor used the situation to feed her confidence, and she said it showed her that she “must be doing something right if she made it to the shortlist.” So, Honor reminds herself that she is good enough, and looks back to this as an example, whenever she faces a new opportunity.

And finally, if there was one message she could put out into the world, it’s: “let your haters be your motivators, and don’t let them tell you that you can’t do it, because you can.”

Stay tuned for more inspirational stories from our amazing overachievers, and share your story with us on Instagram with #HudaBeautyOverachiever.