Would You Put This Skincare Product Anywhere Near Your Skin?

This seemingly bizarre beauty ingredient hit the spotlight a few years ago when it was revealed queen bees Kate Middleton and Victoria Beckham were fans of bee venom facials. I know, it seems kinda crazy, (and it is if you’re allergic to bee stings – beware!), but bee venom contains a combo of peptides, enzymes and amino acids that naturally stimulate blood circulation and the production of collagen and elastin – we are ALL about that! From moisturizers and facials to serums and masks, there’re a ton of products harnessing bee venom’s rejuvenating properties – it’s like nature’s version of Botox. And before you panic, no bees are harmed in the venom extraction process! The bees are attracted to a glass pane that has a light electrical current running through it, which the bees sting. Because their stingers stay intact, only their precious venom is left on the glass – et voila, happy bee, happy us!

For ages, I’ve seen Rodial’s Bee Venom Micro-Sting Patches on the shelves, and after a little hesitation, I finally decided to try them out. The patches are designed to instantly improve the appearance of laugh lines, and as a culprit of being a big smiler, I have really deep smile lines. It’s always been an area I’ve been uncomfortable with, so I’ve tried tons of products and filler too, but ultimately nothing seems to get rid of them completely, so I turned to bee venom to see if it would be the ultimate fix. 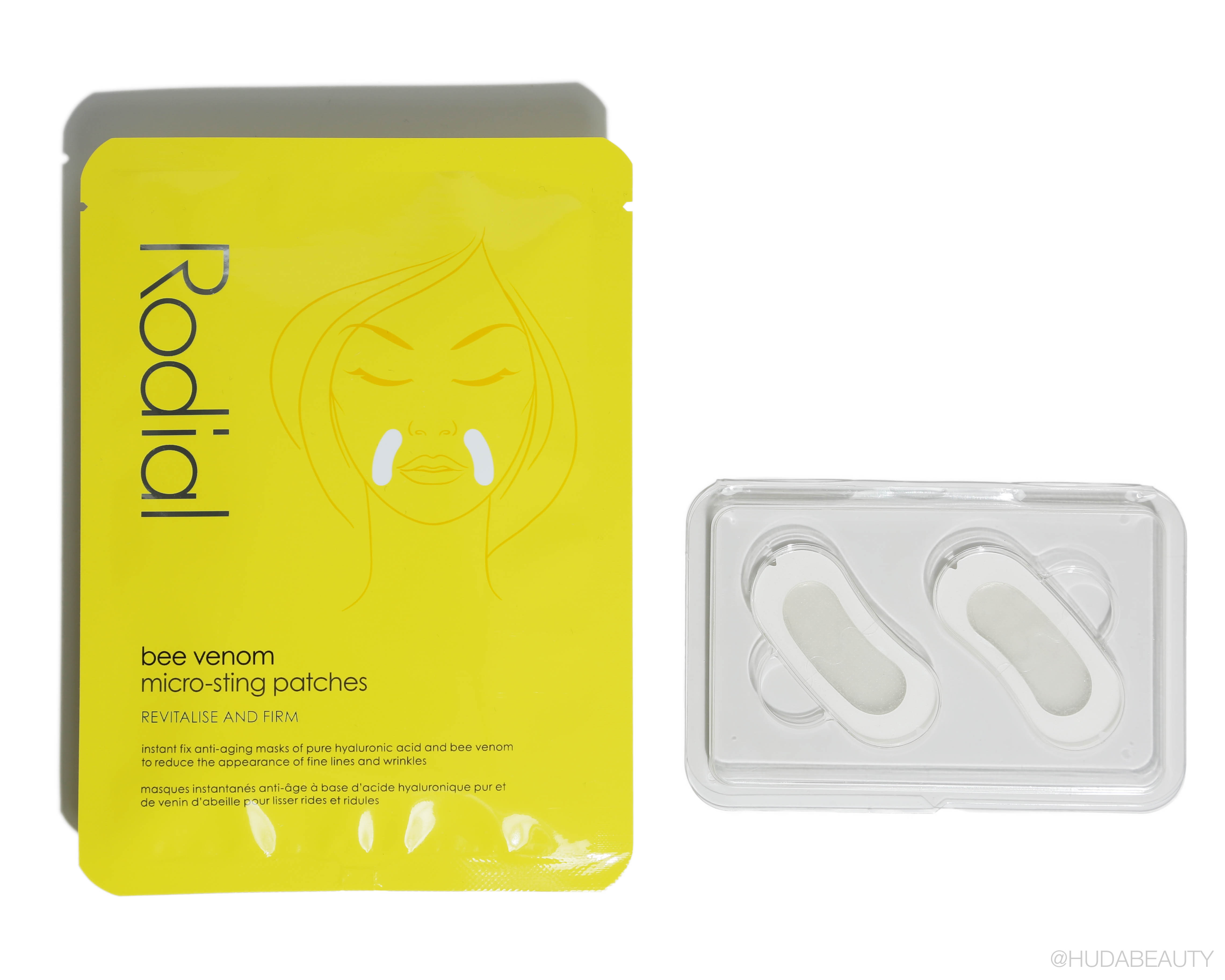 What it is: The bee venom patches are made with pure hyaluronic acid and bee venom, which can be used on smile lines, crow’s feet and frown lines. To effectively deliver the ingredients into your skin, the patches have 350 micro-sting cones (like tiny needles) that ‘pierce’ the skin and plump away laughing lines.

What it does: Hyaluronic acid adds an instant plumping effect and locks in moisture, while the bee venom stimulates collagen production to rebuild and restructure the skin over time. The micro-needle, cone structure is designed to fully dissolve into the skin before the rest of the patch is removed.

What we liked: When I put them on the first thing I was intrigued to feel was the tingling sensation – I was prepping myself for a bee sting, but it wasn’t an uncomfortable feeling at all. When I removed the patches, I immediately noticed that my laugh lines were visibly improved and were basically gone, I was super impressed, but by the end of the day (about 4/5 hours later) they did start to come back.

What we didn’t like: The instructions say to wear the patches for 30 minutes, and this felt like such a long time. I couldn’t get anything done while I was wearing them because every time I spoke the patches would move and start to peel a little. I think if you want to do this, you need to do it while you’re watching Netflix or making moves on Bumble –  this isn’t like a Charlotte Tilbury dry sheet mask where you could run errands in it! I love that it plumped my laugh lines temporarily, but the affect seems short-lived unless you do the patches regularly; Rodial suggests 2-3 times a week for a lasting result. It’s also quite pricey, one sachet of two patches is $32, so this would be a very expensive regular treatment, as well as a  time-consuming treatment for smile lines. I later read on the site that the sheets should be left on for a minimum of 2 hours and ideally 3 hours, which seems like an unachievable amount of time for almost anyone.

The verdict: I think if you have a date or a big event, this would be a cool thing to do beforehand (if you have time), but I don’t see it as a feasible fix for smile lines. I personally don’t have a problem with fillers, so I think that is the most effective permanent solution that I have found so far, which in reality is not too dissimilar to what these patches are trying to achieve, as many fillers now use hyaluronic acid to plump the skin instead of chemical alternatives. Check out what HA is here.