10 Young Black Activists That Will Inspire You 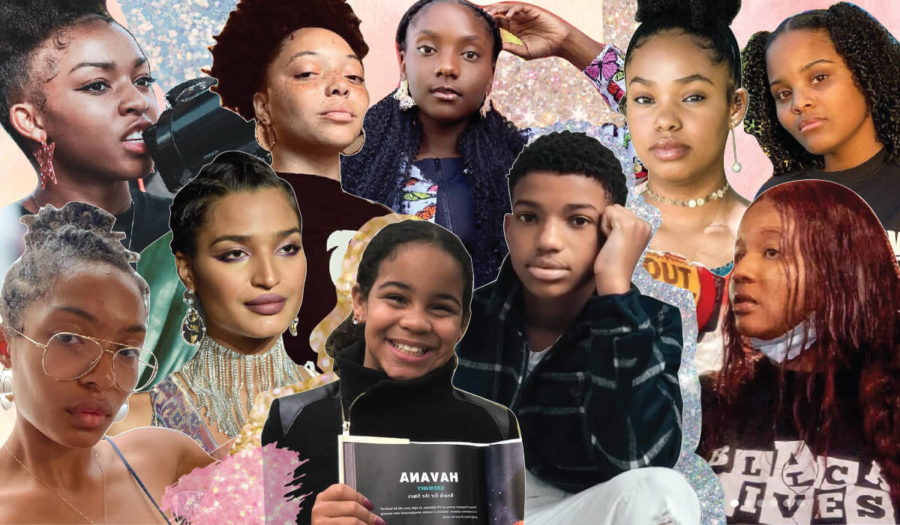 As 2020 draws to a close, a year that’ll go down in history – when the Black Lives Matter movement shouted louder than ever – we wanted to shine a light on 10 incredible young, Black activists. These brave and empowering young people led marches, organized rallies, and are making waves to ensure that there’s a better world for future generations to come. They’re courageous, proactive, and most importantly, demanding justice, representation, and systemic change. Get ready to be inspired.

Rising star, Indya Moore, a non-binary model, actor, and activist, shot to fame with their role in the Netflix series Pose, however, they’ve always used their platform to speak out about the daily and systemic racism Black people endure, especially in the Black LGBTQIA+ community. Indya is a real champion for their community, who continues to break down boundaries and achieve many monumental firsts: They were the first trans person to feature on the cover of Elle USA. Indya continues to dominate the newsstand and is currently featured on the cover of Vogue India and Vogue Spain – another major milestone. Indya is not only demanding equality and greater representation but is also providing their followers with resources to implement actual change. A natural leader.

Nupol was just 13 when she organized her first protest, which set a clear president for her future list of accomplishments. Now at the age of 20, she has already held the position of President of the Youth Coalition of Black Lives Matter of Greater New York, a student-led organization dedicated to empowering young people and preparing them to be leaders. As you’d expect, she’s a shining example of the organization, a leader, activist, and heroine of her community.

Lonnie Chavis, who is best known for his role in TV drama This Is Us, is just 12 years old and is yet all too familiar with the realities of systemic racism in the USA. Lonnie recently opened up in an essay for People Magazine, and his words quickly echoed throughout social media. He wrote, “My life matters, but does it? America paints a very clear picture of how I should view myself. America shows me that my Blackness is a threat, and I am treated as such.” He continues to recount an incident where he was racially profiled.

Not only does Lonnie use his platform to share his story, he opens the discussion for his community, allowing people to feel heard and seen. He is one to watch (and to follow).

At just 13, Aly Conyers attended her first-ever Black Lives Matter protest, and now at 17, she’s leading the way for more. The student activist stood at the front of the BLM demonstration in her home city of Washington, demanding justice for George Floyd and the many who came before him. In fact, shortly after the brutal murder of George Floyd, Aly and her brother, Ace, founded a group, Faces of the Future, and organized a demonstration for the young people in her area.

Aly recently told Teen Vogue, “My brother and I were really moved to have our own protest. We thought we’d get a lot of young people out in a very organized way for our voices to be heard. So, we created a protest at Howard University, and it actually turned out really big. Since then we’ve had two others.”

Brea Baker epitomizes the word trailblazer. Brea is a Yale University graduate, and Founder of the Head 2 Toe Foundation, a non-profit organization that aims to empower and support women and girls all over the world. In 2017, she went on to Co-Found the G.I.F.T.E.D. Community Outreach Program, which is dedicated to filling the void of community advocacy in Long Island.

During her time at Yale, she held the prestigious position as President of Yale’s Chapter of the NAACP, where she focused on juvenile justice and led campaigns against police brutality in New Haven. Now at 26, she continues to speak out and provide a megaphone for her community working for the Justice League NYC. Currently serving as Director of Programs for Inspire Justice, Brea connects industry leaders and influencers to meaningful activism. As we said, trailblazer.

Ever since teenager Thandiwe’s op-ed on gun control and the media response to the Parkland shooting went viral, she hasn’t stopped rallying for the Black community. She Co-Founded the Black Lives Matter Youth Vanguard and was listed as one of TIME’s most influential teens in 2018. Most recently, she worked alongside icon Angela Davis and fellow activists on a documentary theater performance, Power, which showcased the unheard and unseen experience of the Black community facing violence and criminalization on a daily basis.

At just 9 years old, Havana is fighting for representation for young girls of color. While we could go on about her accomplishments, intelligence, and her ever-inspiring actions, Havana says it best… “Girls really need to see themselves in books and know that their future is unlimited. I think that girls can conquer their big, giant dreams and they won’t be ever silent.” We couldn’t agree more.

Give this young activist a follow, and see what she has coming in the form of her Girls Have Rights organization, which describes itself as a “youth-powered global non-profit that provides education through diplomacy to eliminate barriers, so girls have access to basic human rights.” #Following!!

If you’ve ever seen your fave celeb slaying a T-shirt that reads ‘Flexin’ In My Complexion’, you can thank Kheris Rogers for that. In first grade, Kheris was bullied for the color of her skin, and instead of letting it tear her down, she grew stronger and more resilient. She worked with her sister to launch the #FlexinInMyComplexion campaign on Twitter, reclaiming the power and beauty in her rich skin tone, and was met with thousands of positive messages. Kheris told The Undefeated, “I want to help others feel confident in their skin, knowing it is beautiful no matter how dark or light they are.” Kheris and her squad have now sold over 10,0000 T-shirts and gained a cult and celebrity following. Check out her Instagram page.

One thing that’s very clear about American actress-turned-political-advocate, Yara Shahidi, is she’s just getting started. Yara Founded Eighteenx18, a platform that encourages young people to be more engaged and active in politics, which was most recently renamed WeVoteNext to encourage people to vote in the 2020 election. She educates the younger generation on how politics can affect their daily life and why their right to vote should not be taken for granted. She’s engaged, insightful, and proactive.

Mari Copeny, also known as Little Miss Flint, is a clean water activist who fought for her community when the residents of Flint, Michigan noticed their public drinking water source contained dangerous levels of lead. At the age of 13, she’s courageous, outspoken, and socially aware; and it’s not going unnoticed, as shown in the picture above where she meets presidential candidate, Joe Biden. On her website, she says it all in just one quote, “My generation will fix this mess of a government. Watch us.” We’ll be watching with eager eyes!

For more amazing figures in the Black community, check out these inspirational women who shook up the beauty industry.