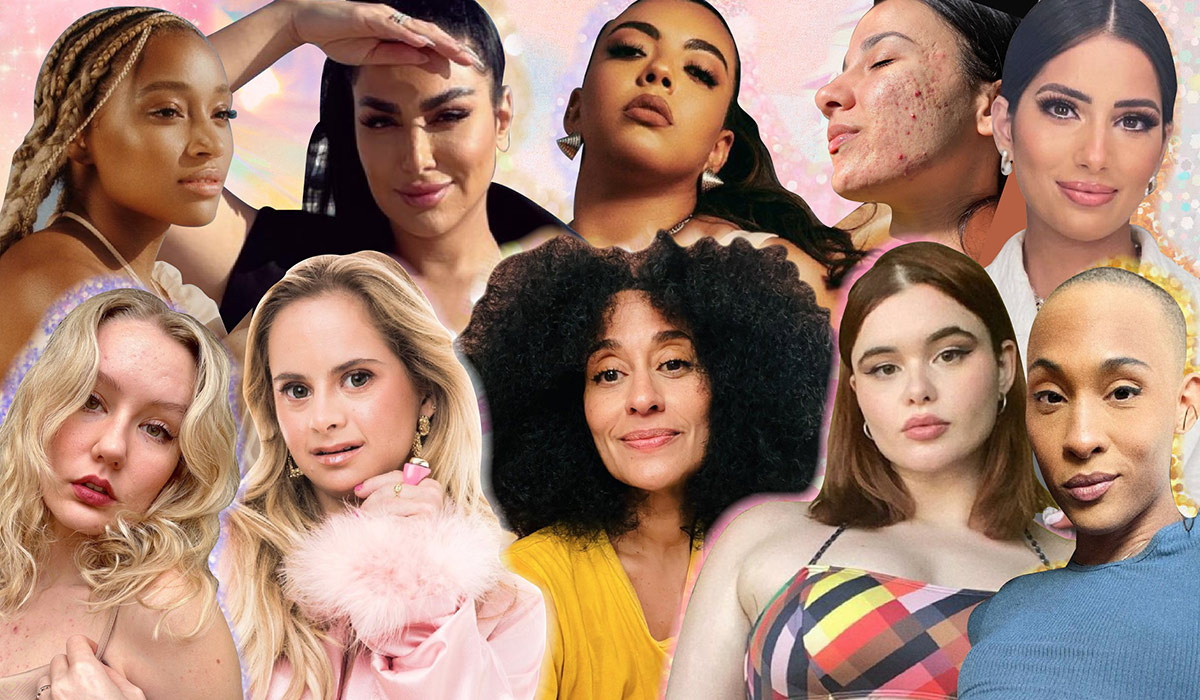 The idea of traditional beauty standards makes no sense to us; there is no definition of beauty. Everyone is different, and we’re all beautiful in our own way.

Ultimately, traditional beauty standards are simply a tool society has used to force men and women – particularly women – to conform to an ideal, that for the most part, is unattainable. So rather than us feeling empowered by the things that make us unique, we feel “less than” or “unworthy,” and it’s time for that to stop.

In honor of International Women’s Day, we’re shouting out 10 incredible women who are breaking down these toxic beauty standards and celebrating what makes them beautiful. Some of them you’ll know instantly, the others you’ll want to follow instantly. Whether these women choose to discuss the beauty standard they’re determined to abolish, or simply do so by being authentically and unapologetically themselves, what they’re doing is SO important, and we as followers (and fangirls) will be forever grateful.

At just 25 years old, Sofia Jirau has already made headlines this year by becoming the first model with Down syndrome to pose for Victoria’s Secret. However, it was certainly not her first time modeling, she also dominated the runway at NYFW in February 2020 during the Marisa Santiago show. If you just scroll through her Instagram feed for one second, you’ll feel her energy radiate. Not only is she redefining the new Victoria’s Secret era, but she’s rewriting the narrative for people with disabilities and paving the way for others to feel seen and heard in every space.

A post shared by M A I A ♡ ACNE POSITIVITY (@its_just_acne)

After years of being bullied in high school, Maia took to Instagram to rewrite her story and reclaim her confidence. She does so by posting raw, unedited photos of her skin with pride. However, she doesn’t want to be applauded for showcasing her skin, she wants it to become the norm.

In an interview, Maia said, “It’s sad that sharing a specific skin condition is deemed as a ‘brave’ thing to do. It should be something that is a normal thing to do,” she says. “Acne is beautiful and will never be something that will define an individual.” We couldn’t agree more.

P.S. We’re also obsessed with her Instagram bio; “Just a girl with acne, helping you to love the skin you are in!”

Barbie is – as a Euphoria High student would say – a badass b*tch. Her confidence and IDGAF attitude radiate from her Instagram page, which is why she’s one of our fave people to follow RN. She doesn’t abide by what outdated beauty standards say she should, she expresses herself freely through makeup and beauty, and its powerful AF.

In an interview with Vogue, Barbie notes the importance of just continuing to express herself without always bringing the topic of body positivity to the forefront of the conversation. She said, “A lot of people do a lot of work for the community, where they put their life on the line to make the world a better place and I salute them. But for me personally, what makes me feel more empowered is quietly doing it. I’ve said all I have to say in videos and articles. So now, the next step is just to do it.”

Meet Rania Hammad, a Dubai-based Egyptian influencer who after losing her leg, is now normalizing disabilities in the fashion world.

In an interview with Vogue Arabia, she spoke about sharing her journey on social media and how it helped her recovery, which included more than 30 surgeries and grueling physical therapy. Rania begins, “Helping other people has helped me. When I started sharing on Instagram, I wanted to normalize the fact that some of us are different but we are the same.” Although she does also say that at one point she felt like an alien because of how strangers treated her.

Today, she no longer feels shame and wants to use her platform to fight for representation and help people accept and fall in love with their bodies. She says, “I would love the industry to be more inclusive when it comes to photoshoots, just like we’ve seen with models of various sizes. Let’s add clothing for people with disabilities, and introduce more differently-abled models. It’ll encourage people to love their bodies.”

Finally, she adds, “To women who are experiencing issues with confidence, I would say, you matter. Love yourself for who you are and only ever change for yourself. ” A true role model.

We’ve been obsessed with Tracee Ellis Ross for years, but our love for her and her mission to empower the curly hair community only deepens with time and every new accomplishment she achieves, which BTW, is all the time.

Aside from being an advocate for diversity, equity and inclusion in Hollywood, Tracee created her hair care line, Pattern, in 2019 to fill the void she saw in the beauty world. Whether she’s creating her own song to celebrate Black hair or ensuring there’s equal representation as her role as the diversity and inclusion adviser at Ulta Beauty, she’s a champion for women everywhere.

Empowering Stories: Christina Abiola On How She Became The Representation She Wanted To See

Ameni Esseibi is paving the way for women everywhere; normalizing a body shape that has for far too long been under-celebrated in the world of fashion and beauty. As Ameni states in her Instagram bio, she is the Middle East’s first “curvy model” and a “body positivity advocate.” She’s paving the way and fighting for the representation of all women everywhere.

When speaking about her accomplishments to Vogue Arabia she says, “It’s the biggest honor to be the region’s first curvy model, but it’s also sad. The first one should have existed years ago. I think we were waiting for someone brave enough to go against society, and that is something that is difficult in the Middle East, where we are so judgmental.”

MJ Rodriguez is a true queen. This year she made history as the first trans woman to win a Golden Globe for her role in the hit TV show, Pose, which follows a group of trans people and gay men as they navigate NYC in the 80s and 90s amidst the height of the AIDS pandemic.

Whether through the show or IRL, MJ continuously redefines and questions traditional standards of beauty and instead, finds beauty in what makes her feel good. Case in point: when she recently shaved her head to shed everything she felt she was carrying in her hair.

A post shared by SELF LOVE • MAKEUP • SKINCARE (@theblemishqueen)

Nicole Herbig is a 23-year-old skinfluencer who goes by the Instagram handle @theblemishqueen. Her page is jam-packed with skincare recommendations for acne-prone skin, and fire selfies with important, empowering messages overlaid, reminding people everywhere that normal skin is beautiful. In fact, she often edits her images to emphasize her skin and normalize the existence of pores and pimples on social media. She told Insider, “I like to show that this is what my acne really looks like, this is what my face looks like,” she said. “Like, here are my pores, let me sharpen this a little bit.”

Even as a teenager, Amandla Stenberg was fighting for representation and breaking down Eurocentric beauty standards with unwavering eloquence and authenticity. Seriously, if you haven’t seen their crash course on Black culture entitled, “Don’t Cash Crop On My Cornrows,” check it out.

Ever since, Amandla has expressed herself with transparency and realness. They’ve been honest, vulnerable, and raw throughout their self-discovery process and continued to call out the appropriation of Black culture and tokenization while discussing the importance of embracing their Black heritage.

In an interview with Solange, Amandla powerfully said, “I think that as a Black girl you grow up internalizing all these messages that you say you shouldn’t accept your hair or your skin tone or your natural features, that you shouldn’t have a voice or that you aren’t smart. I feel like the only way to fight that is to just be yourself on the most genuine level and to connect with other Black girls who are awakening and realizing that they’ve been trying to conform.” A modern-day trailer blazer.

Last but not least, our very own Huda Kattan. Here at Huda Beauty, we feel it’s our responsibility to stop perpetuating unrealistic beauty standards, and more specifically, the extreme photo editing and Photoshop culture we live in today.

When we launched WISHFUL Skincare, it was really important to Huda that we made the brand Photoshop and makeup-free. After all, it’s skincare, so it doesn’t make sense to use makeup and editing for campaigns. When we looked around for other brands to see who else was doing this, we found BARELY any, and we were SHOCKED (and kind of mad), to say the least! We no longer use Photoshop or edit our campaign imagery, and if we do ever edit or enhance any image, we add clarification for transparency because we think it’s fair that people know what they’re looking at.

At Huda Beauty, we view beauty as a tool of EMPOWERMENT. It’s life-changing when it’s used as a form of expression and empowerment, rather than a tool of exclusion and unworthiness, and these women on the list understand that, and we love them for it.

Which women would you add to this list? Let us know in the comments below.