Nowadays, we rarely buy a product without reading the reviews first: it can give you SO much insight on a product. So when we recently discovered a product that was getting INSANE reviews on Amazon – one woman literally said the product changed her life – we had to find out more. The product in question is the AmLactin 12% Moisturising Lotion, $26, and people were claiming that it’s their secret for getting rid of bacne and buttne, aka those annoying little pimples on your booty and back. As always, we wanted to get a derm’s opinion, so we got in touch with NY-based dermatologist Dr. Doris Day, for her seal of approval. Here’s everything you need to know about the body lotion that’s blowing up on Amazon.

AmLactin is like a moisturizing, exfoliating hybrid, which explains why it’s such an effective treatment for bacne and buttne. Firstly, the product contains rich emollients to hydrate the skin as well as humectants that will draw in moisture, both of which will relieve dryness and leave softer, smoother skin in its place. The key active ingredient is 12% lactic acid, a potent AHA that’s able to hydrate, penetrate, and exfoliate the skin at a deeper level to remove dead skin that’s blocking your pores and causing pimples. This strengthens the skin’s barrier as it removes weakened skin cells, which can help address dry or sensitive skin. It can also help prevent shaving bumps as it’ll reduce dead skin build-up that leads to ingrown hairs. 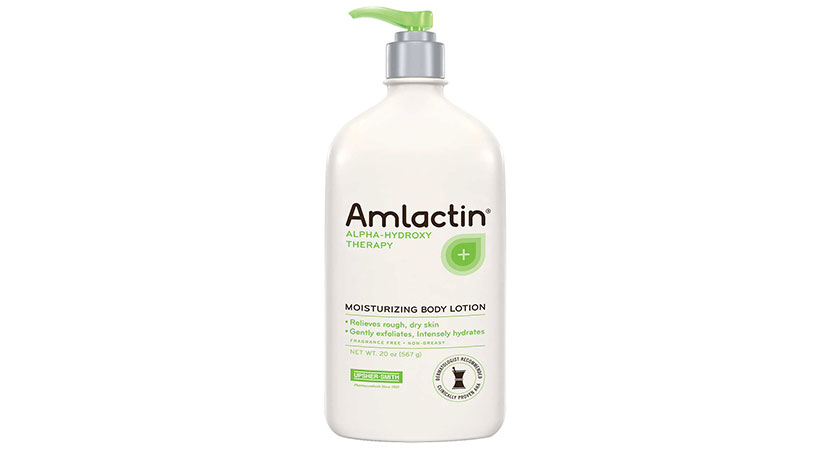 One Amazon fan wrote “I have been using AmLactin for over a decade now. AmLactin is good for smoothing out imperfections. Over the years, it has taken my skin from feeling rough and bumpy to feeling smooth.” While another said, “I had a bad case of keratosis pilaris [those little white bumps] on my legs. 2 months later, it’s COMPLETELY gone.” Another said “I have a cyst on my arm that was about the size of a dime and was raised… Unexpectedly this lotion has shrunk the cyst by like 75%! It’s almost completely flat now and lightened in color slightly.” You’ve got to admit that’s a hard sell.

5 Products That Will Take Down Booty Spots & Bacne

We checked in with Dr. Day to see what she thought of the product, and she confirmed, “I have seen the product and I’m a fan. Its main ingredient is lactic acid which gently exfoliates but is also a humectant, which means it helps hydrate the skin. I recommend it for use on the body but not the face. I also like that it’s available at the drugstore and is very very reasonably priced. I recommend it to my patients on a daily basis. One word of warning: don’t apply it right after shaving since it will sting.” So in short? She’s a big fan!

How To Use AmLactin Lotion

We recommend using this lotion every day, as soon as you step out of the shower, as this will help lock in moisture. Due to its high concentration of lactic acid, there’s an increased risk of sun damage, as you’re leaving your newly exposed skin unprotected. So make sure you wear SPF 30 with 5-star UVA rating whenever you’re in the sun.

Let us know if you’ve tried this lotion in the comments below.