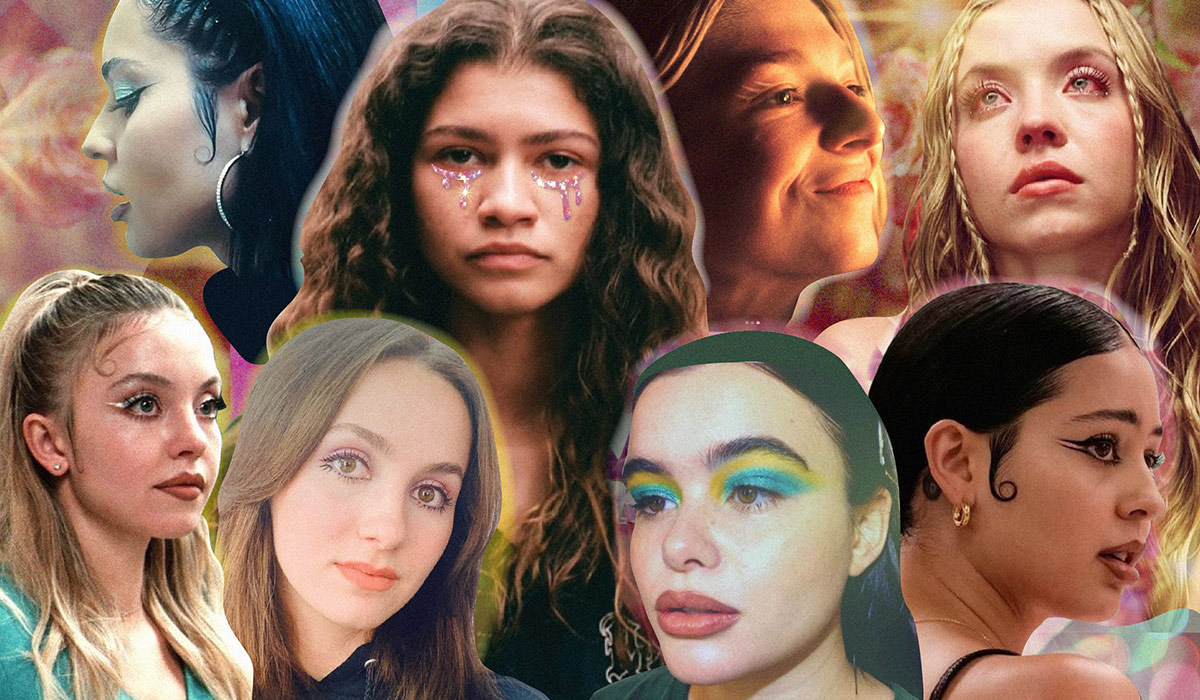 Real talk: have you even watched Euphoria if you haven’t recreated one of these impeccable makeup looks yet? If you haven’t seen the show yet, stop what you’re doing and head straight for season 1, episode 1 – we promise you won’t regret it. We don’t think a TV show has had this much hype since… What are we talking about? Few shows have ever had this much hype! A HUGE part of the phenomenon centers around the jaw-dropping makeup looks and general vibe created by makeup artiste Doniella Davy, who btw just announced she’ll be releasing her own makeup line *swoon.*

Since season 2 aired, the world has gone crazy over the iconic quotes and rollercoaster storyline, which literally gives us so much life/anxiety… We won’t even discuss Rue in episode 5. And, of course… the makeup. You can’t scroll through TikTok for more than 10 seconds without seeing a Euphoria-inspired look. Each look has us drooling over our screens and reaching for our makeup bag. Every single element of each beat tells a story, from Maddy’s killer liner looks that are as sharp as her sass to Kat channeling her main character energy via her eyeshadow and lipstick combos.

To inspire you to be the baddest b*tch possible and exercise your inner MUA, we’ve curated a mood board of the best looks from season 2 so far. Some of them you’ll recognize instantly, and others you might not have spotted, but DW, we’ve got you covered.

If you ask us, this look hasn’t got the street cred it deserves. It’s next level.

It’s different, and we love it. If this look feels too bold for you, play with elements of the design instead.

All we can hear when we see this look is…”B*itch, you better be joking.” Well, you’ll have the last laugh with this look when you’re raking in the compliments.

Honestly, just looking at this look brings up so many emotions. One thing’s for sure, we’ve seen the hair and pink makeup combo copied everywhere ever since.

Green is a major 2022 color trend! Now you can embrace the green trend while also experimenting with a Euphoria-inspired look. We’ve been crushing over this look for weeks – we were feeling ourselves when we tried it out.

Lexi is coming into her own this season, and we love to see it. Case in point: this edgy AF spikey liner look.

There’s no denying Cassie has spiraled this season, but her makeup looks have remained on point… no doubt thanks to that crazy morning routine 😉 We’re loving this white liner, which, BTW, is another huge trend RN.

Maddy’s eyeliner looks deserve their own spin-off series if you ask us. The precision has us gasping every episode. If you’re in need of an easy-to-use, super-thin liner to recreate these looks, our Huda Beauty Quick ‘N’ Easy Liquid Liner, $19, is perfect.

If you were too enthralled with the scene, it’s possible this stunning look may have escaped your notice. We love the abstract arty vibe, which is fun to play around with yourself.

Another more “understated” Euphoria look that’s super pretty yet still a little edgy. You can switch up the color combinations depending on your mood or outfit.

“You don’t think I have a mind of my own?” All the vibes!

Just another wavy Jules look, which has us reaching for our makeup bags and adding a neon green shadow to our cart. In need of some inspo? We love the Danessa Myricks Colorfix Neon, $18, in the shade Wasabi.

Even though she wasn’t auditioning for Oaklahoma, Cassie served major country music vibes.

Do you guys watch Euphoria? Who’s your fave character, and which is your favorite look? Let us know in the comments below.