Forehead Reduction Surgery Is A Thing - We Did It!

Botox and fillers are pretty reg procedures these days and something we often discuss without batting an eyelid – not because it’s not a big deal, but because it’s so common. However, recently a colleague casually mentioned a procedure they were planning to have, which gave us a much more “Wtf?!” response. Literally, we had never heard of hairline-lowering surgery before, and we had just as many questions as you do on hearing that. Our initial response was, what the hell is that? Then, why?!

Our colleague, Carla, told us her forehead had always been an insecurity of hers: “For as long as I can remember I have hated how large my forehead was. My hair was always styled with a side fringe, I would never face the direction of the wind in case it exposed my forehead and I hated that I felt I could never just scrape my hair back off my face.”

Carla was beyond excited to fly to England and have forehead reduction surgery, as terrifying as that seemed to us! Naturally, we supported her decision (Carla was truly doing this surgery for herself, which is very important), and of course, we wanted the full scoop on her hairline-lowering operation, aka foreheadplasty. Carla said she would love to share her journey with us and was more than happy to take before and after pictures! So we’re telling you all about how forehead reduction surgery works with insights from Carla (now two months post-op) and her clinic, the London Bridge Plastic Surgery & Aesthetic Clinic, who shared all the details of the procedure with us.

We spoke to Carla’s doctor, Dr. Christopher Inglefield, who performed the hairline-lowering surgery, and we asked him all our burning questions about the surgery.

First of all, how far can you lower the hairline?

“This is something that varies from individual to individual. Factors that would contribute to how far we can advance the hairline include the laxity of the individual’s scalp, if the individual has ongoing/has had previous hair loss. As well as these factors, the patient’s individual goals and expectations are important,” Dr. Inglefield explained.

Carla’s final result was a reduction of her forehead by 3 cms. 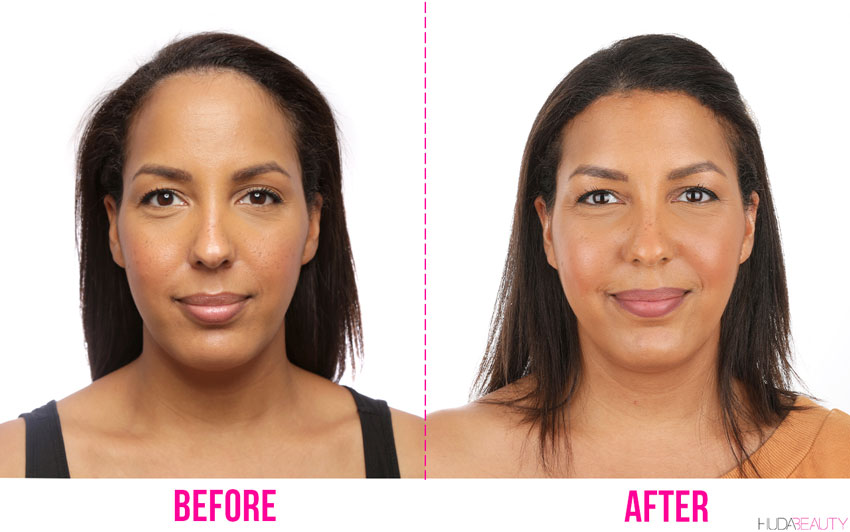 How does Forehead Reduction Surgery work?

“Foreheadplasty, Hairline-Lowering Surgery normally takes approximately 1.5 to 2 hours to perform depending on the complexity of the surgery. It is done under general anesthetic as a day-case procedure.”

Step 1: After washing the hair, Dr. Inglefield injects local anesthetic to the area, which helps to reduce bleeding during the procedure, this also helps with pain control postoperatively.

Step 2: A zig-zag incision is made along the hairline (this helps to minimize scarring).

Step 3: The scalp is mobilized to the back of the head and pulled forward as much as needed.

Step 4: Two small endotine devices [tiny implants] are placed under the scalp, which are often described as ‘carpet grippers’. These are made from a dissolving suture material and should dissolve away within the first three to four months following surgery. These help to keep the scalp in place as it heals.

Step 5: A section of the forehead skin at the hairline is removed. Dr. Inglefield then sprays a tissue glue, Artiss, to hold the scalp in place. This helps to reduce fluid buildup underneath the scalp as well as to reduce the risk of the scalp sliding backward during the healing process.

Below is footage of Carla’s surgery filmed by the London Bridge Plastic Surgery Clinic, which they shared on their Snapchat account. We have blurred the footage due to the graphic nature of it, but we have kept the sound and captions as it illustrates the full process of the surgery. Please be warned, the content in the video is graphic.

How long is the downtime?

Apparently, moderate pain or discomfort is expected for three to five days after surgery, and patients can go back to their normal daily activities after one to two weeks, excluding intense exercise or contact sports, which should be avoided for at least six weeks post-op.

Carla told us she actually felt fine the next day, “It wasn’t painful at all! This is probably due to the pain medication they prescribed, but even with that, I was expecting to be in pain considering the nature of the operation. The only time I felt real pain was exactly one week after the operation. The pain wasn’t on my scalp oddly enough, it was between my eyebrows and felt like I had a huge weight resting on there. This only lasted a few hours.” 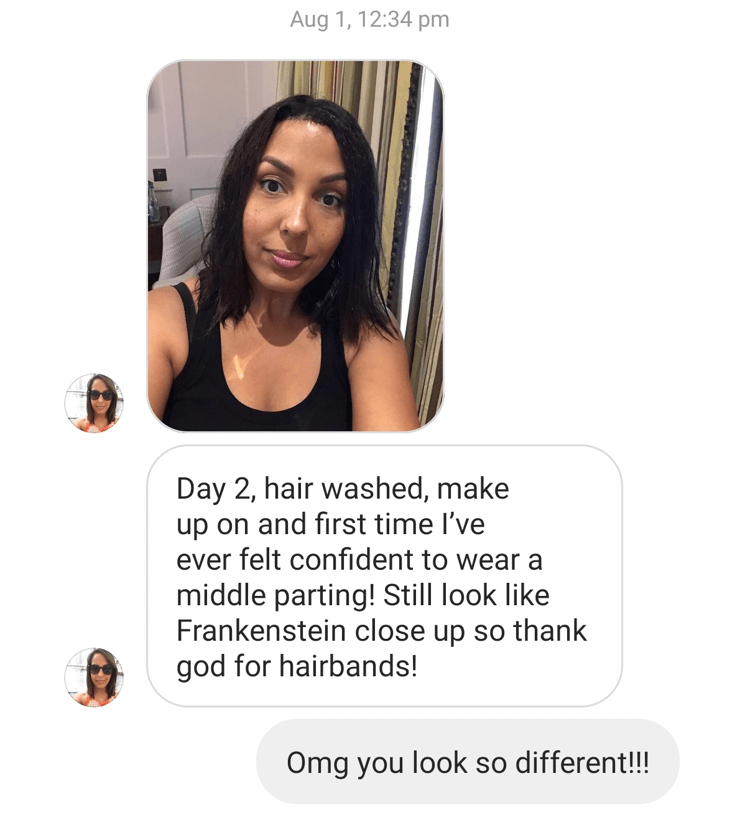 Carla kept us posted with updates on the surgery while she was in the UK.

Will there be visible scarring?

“The incisions are placed in the natural hairline to be as hidden as possible,” Dr. Inglefield tells us, and it’s for this reason that he makes a zig-zag incision, as this allows for the scar to fade more naturally into the hairline as it heals. “These incisions heal well in seven to 10 days and continue to fade over time. A scar will not become completely invisible, although over eight to 12 months it will become more inconspicuous as redness is reduced and pigmentation returns to normal skin color.”

Two months after her surgery, Carla’s scar has healed to a point that you wouldn’t notice it. Carla told us “The scar has healed really well, I’m really happy with it! I continue to massage the ointment provided by the clinic into the incision area daily and I make sure I put SPF on it so it doesn’t darken in the Dubai sunshine! You can’t notice the scar it as it is hidden really well.” Carla has been using the SkinCeuticals C E Ferulic Anti-Oxidant Serum, $166, which she says was included in the cost of the surgery. Carla was told to start applying the serum two weeks before the surgery and asked to apply it to her hairline daily as a pre-op treatment. 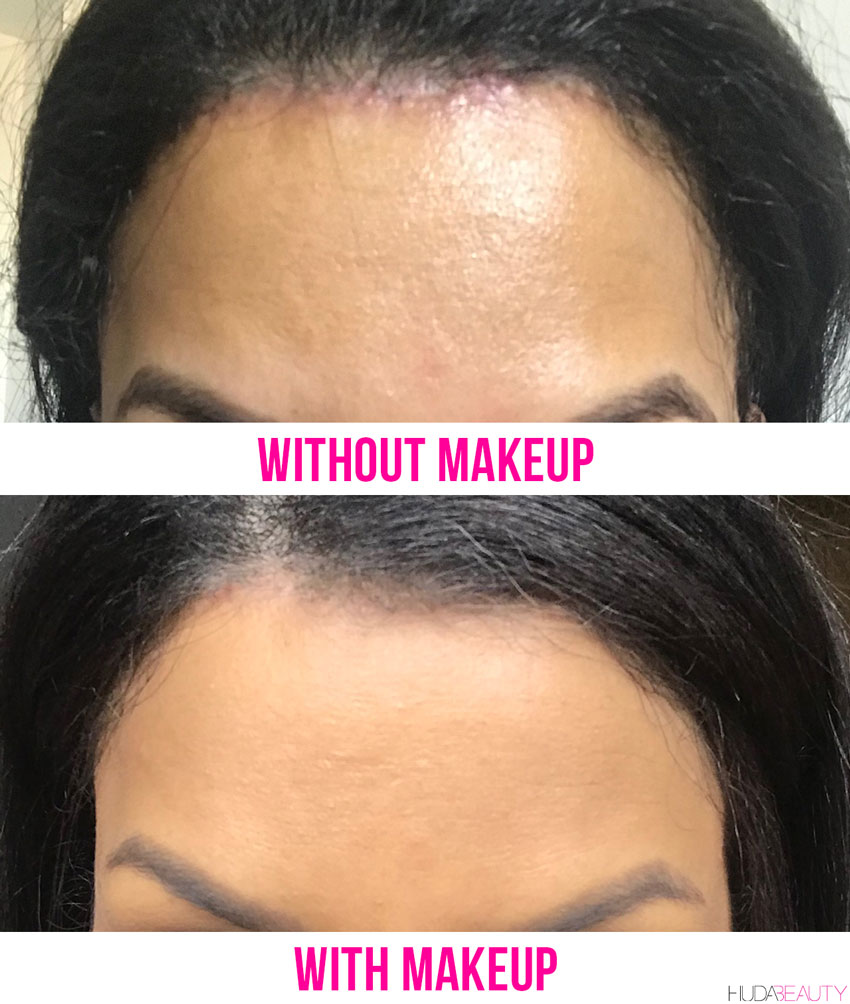 Carla two weeks post-op, with and without makeup. The scars are barely noticeable!

The cost for hairline-lowering surgery is around $8000 at the London Bridge Plastic Surgery & Aesthetic Clinic, which includes the surgery, clinic fees, and post-surgery care. However, the cost will vary from country to country and clinic to clinic. We recommend reading reviews and having one or two consultations with the doctor before carefully selecting your clinic and committing to the procedure.

Will you see results immediately? 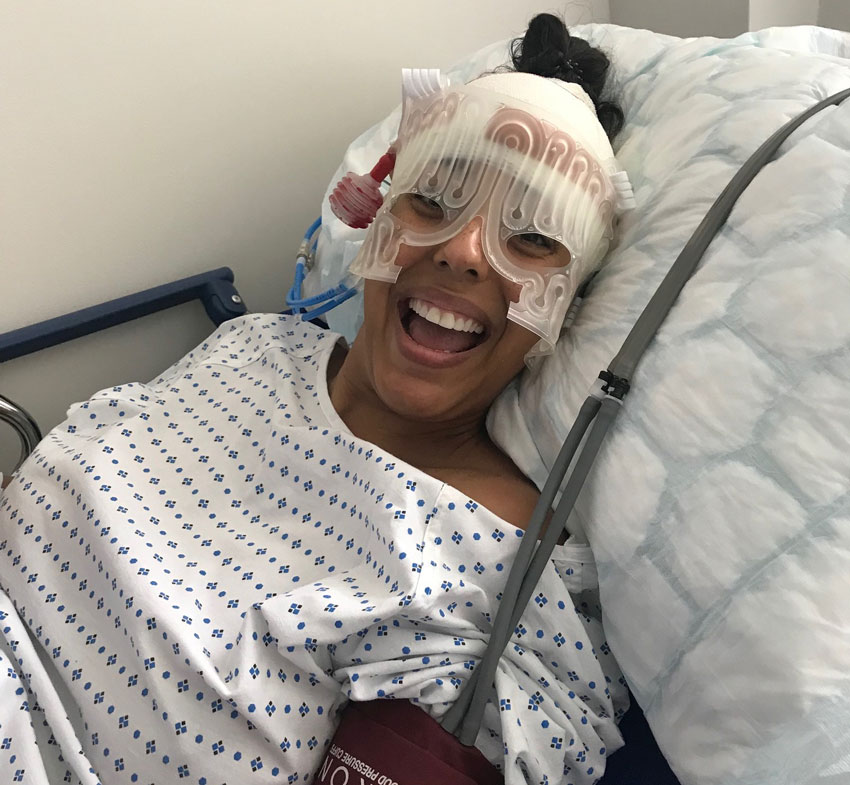 Carla after her forehead reduction surgery!

“After the procedure, the patient has a drain in and a bandage around his/her head. This is all removed before the patient is discharged from hospital. Patients can see immediately the change however we advise our patients that it can take six weeks or more for the final result to be achieved,” Dr. Inglefield told us.

Can anyone have hairline-lowering surgery?

“To determine if it is appropriate for the individual to have the procedure, he/she is assessed during the consultation. Factors that would require further assessment would include if the person has had any previous surgeries to the head or scalp, or if the person has had hair or skin-related conditions. If for any reason the individual is unsuitable for hairline-lowering surgery, he/she will be advised against this form of surgery.” 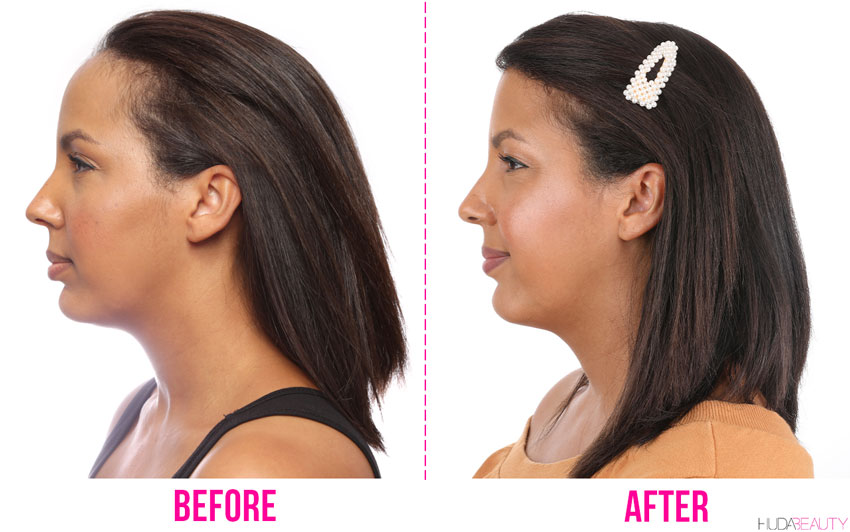 Are there potential complications?

“Common to all surgical procedures there are always risks associated with surgery. However, complications are uncommon even with complex facial surgery. Bruising can occur and may take two weeks to resolve, while major bleeding is rare. Hematoma (blood collection) is rare (risk less than 0.1%). This may require re-operation or drainage,” Dr. Inglefield explains. He continues that other possible complications, although very rare, include:

Skin necrosis: This “causes discoloration to the scalp and is caused by compromised blood flow to the tissue,” and should be reviewed immediately.

Infection: This is “infrequent (less than 0.5%) and will require a course of appropriate antibiotics.”

Facial muscle weakness: Apparently this is uncommon, but it can affect the forehead and may last for six to eight weeks, while permanent weakness is rare. Although “Altered sensation in the scalp is expected and will slowly improve from one to two years following your surgery,” Dr. Inglefield says. Carla is now nearly two months post-surgery and still doesn’t have full feeling of her scalp.

The result for Carla? She is incredibly happy with her surgery: “Having this operation has massively increased my confidence and I couldn’t be happier with the results. I just wish I had known about it earlier!”

Obviously, forehead lowering surgery is a major procedure and one that should be taken very seriously. Carla told us she had wanted surgery for years! The process doesn’t come without its risks, but that said, in Carla’s experience, she has had barely any downtime and little to no complications. As with all cosmetic changes, if it’s something you want, then it’s your decision to make.